Cereal: Does it Really Take Too Long to Eat?

People have been eating less breakfast cereal in recent years, according to the Wall Street Journal, and one reason is that it takes too long to eat. Yes, that’s right. “Cereal takes too long to eat during the morning rush and you can’t eat of bowl of cereal in the car.” That’s the Journal quoting various consumer surveys. I find this baffling. Since when is cereal-eating a slow activity? It just doesn’t take that long to pour cereal into a bowl with milk and scarf it down, especially if you’re trying to eat it all before it gets soggy (which some people don’t mind or even like, but I prefer my cereal crunchy to the last bite). This morning, I needed two minutes, twenty seconds, to enjoy a bowl of Wheat Chex. I wasn’t trying to save time. I read the paper, and I added extra milk at one point. Two minutes! Okay, closely to two and a half. Still, to really savor cereal, and perhaps add banana, we’re still only talking about five minutes. Five. Minutes. Obviously, no one wants to take time to sit or even stand for breakfast, once thought to be the most important meal of the day. (Some experts are now questioning this long held belief. I’d argue that whatever the evidence, breakfast is certainly more nutritionally essential than dinner, which all of us love but none of us need. A good lunch has got to be pretty important, too.) I love breakfast! The thought of hot coffee gets me up in the morning. Not the thought of showering, dressing, and driving to the McDonald’s take-out; no, I like stumbling down to the kitchen and making my own pot—ready in, say, five minutes. Coffee, along with yogurt and jam, or fruit (an apple quickly steamed with sugar and cinnamon!), that’s my favorite breakfast of late. But cereal is cool (Grape-Nuts: incredible crunch), and who doesn’t like toast? Especially with coffee? Eggs and bacon I reserve for the kids, the ones with the low cholesterol. One kid has one-upped me. She’ll prepare her oatmeal the night before and leave it in the fridge to get all creamy with things like almond milk and cinnamon (we like cinnamon in this family). The other has gradually come to realize that sleep takes precedence over food in the morning. He’ll probably end up being one of those people who rush out the door with a protein bar. Baffling. 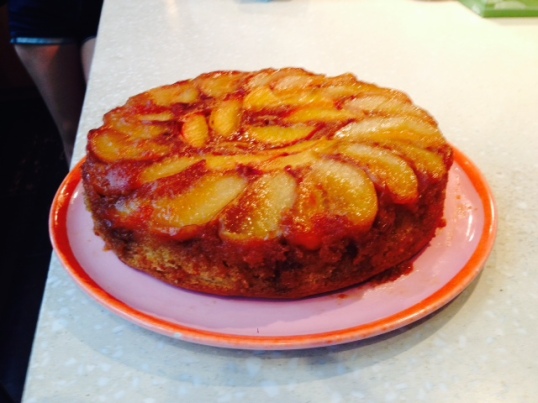 You can’t go wrong with this one.

Have you been looking for a peach dessert that isn’t crumble or pie? I’ve got one! It’s Tish Boyle’s peach tatin cake from The Cake Book (Wiley, 2006). It’s peachy, it’s cakey, it’s caramel-y, and it comes out perfectly (or as near as anyone could want) even for baking tyros like me. The preparation is time consuming, I can’t lie, but only if you’re doing it alone. Enlist a sous baker, and it’s more than manageable. My sixteen-year-old, Vanessa, and I made this together, and we had it in the oven within an hour. PEACH TATIN CAKE Tish says it serves 8-10; I say 6-8, really 6, since everyone will want seconds. Ingredients: For caramel peach topping: 1 cup sugar 2 TB water 5 TB unsalted butter, cut into tablespoons 4 large peaches (recipe was divine with not-quite-ripe peaches, and even better, if a bit wetter, with ripe ones) For cake: 1 1/2 cups all-purpose flour 1 1/2 tsp. baking powder 1/4 teaspoon baking soda 1/2 tsp. ground cinnamon 1/2 tsp. ground ginger 1/4 tsp. salt 1 cup sour cream 2 tsp. vanilla extract 9 TB unsalted butter, softened 1 cup sugar 2 large eggs Prepare the topping: Position rack in the center of the oven and preheat to 350 degrees. Grease the bottom and sides of a cake pan and line the bottom with a round of parchment paper. The recipe calls for a 10”x3” pan; mine is 9.5”x2” and works fine. (Don’t use a springform pan, because the caramel is sure to leak out of it.) The recipe calls for greasing the parchment paper. I forgot to do this had no trouble getting the cake out of the pan intact later. In a medium saucepan, combine the sugar and the water and cook over medium heat, stirring until the sugar dissolves. I found I need to add at least twice as much water to dissolve the full cup of sugar. Once the sugar is dissolved, increase the heat to high and cook until the mixture turns golden brown. This can take a while, but once the darken begins, it proceeds quickly. Remove the pan from the heat and whisk in the butter, one piece at a time (the mixture will bubble furiously). Carefully pour the hot caramel into the prepared pan. Cut the peaches in half, then cut each half peach into six wedges. Arrange the wedges, overlapping them slightly, around the edge of the pan, on top of the caramel (which will be hard by this point). Arrange another circle of wedges in the center, facing the opposite direction, for a truly professional effect, until the caramel is covered completely. Make the cake: Sift together the flour, baking powder, baking soda, cinnamon, ginger and salt in a medium bowl. Whisk to combine, and set aside. In a small bowl, stir the sour cream and vanilla extract; set aside. In the bowl of an electric mixer, using the paddle attachment, beat the butter at medium-high speed until creamy, about 1 minute. Gradually add the sugar and beat at high speed until the mixture has lightened in color and texture, 2 to 3 minutes. Reduce speed to medium and add the eggs one at a time, beating well after each addition and scraping down the sides of the bowl as needed. At low speed, add the flour mixture in three additions, alternating with the sour-cream mixture in two additions, mixing just until blended. Spoon the batter in large dollops over the peaches and smooth into an even layer. Bake for 45 to 50 minutes (my pan only needed 40 minutes), until the cake is golden brown and springs back when lightly touched. Set the pan on a wire rack and cool for 10 minutes. Run a thin-bladed knife around the edge of the pan. Using pot holders, carefully invert the cake onto a cake plate. Peel off the parchment paper. Serve the cake warm (the best!) or at room temperature. Can be stored in an airtight container at room temp for up to two days or refrigerate for up to a week.

I still get college anxiety dreams. Had two just in the last week. I never have exactly the same dream, but I’m always either late for an exam, for which I haven’t studied, or I suddenly realize, OMG, I haven’t been going to any classes and midterms are coming. In fact, wait–where are my textbooks? Why I get these kind of dreams, decades past college, is beyond me. I don’t remember collegiate life being all that stressful–at least nothing I couldn’t handle. What gives, subconscious? I’m guessing these dreams are protection against the source of my real-time anxiety, my writing, or more specifically this manuscript. that I am still fixing, several months past the deadline I’d set for myself. Things could be worse. I could be dreaming about agents rejecting me, or editors hating any manuscript I send. These are nightmares that could be all too real.

Kids these days, under more pressure than previous generations, are going to have much richer fodder for anxiety dreams. My poor 16-year-old, Vanessa, has been feverishly studying for a European history exam that’s going to include such questions as, “Compare and contrast all the wars of the 18th, 19th and 20th centuries,” and “How do social constructs differ from the 18th century to the 20th century?” She not only had to study all the major developments in Europe from 1400 on, but be prepared to tackle sixteen different short answer questions and a half-dozen essay questions.

I’m feeling grateful at how easy creative writing seems in comparison. Thank you, Vanessa! She should be out of her exam about now. Her work’s over; time for mine to begin.