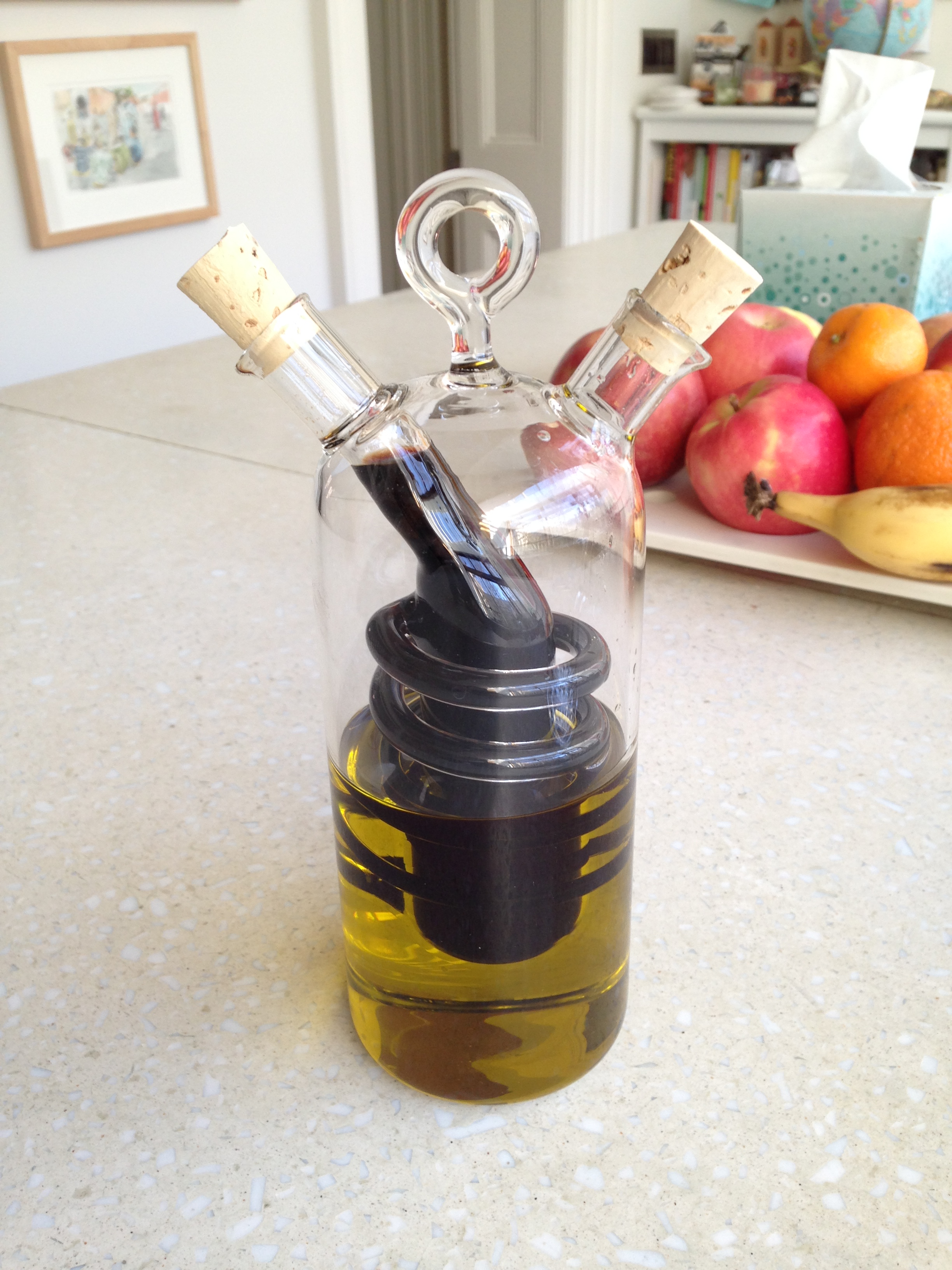 My twenty-year-old son Davison gave this clever oil-and-vinegar vessel to me for Christmas.

I told him about two books he could get me; I wanted to make things easy for him, and I really do always love a book. But he went off and found me something that I didn’t even know I wanted! I’ll be eating more salad now, for sure, which I’ve been meaning to do for quite a while. It’s one of those vague New Year’s resolutions that barely survives the first week of January. But guess what, I’ve had two salads already this week, and it’s only Wednesday! Thank you, dear Davison, for thinking about my pleasure and my health!

Here he is, wearing my reading glasses and a new scarf. He’s affecting the Brooklyn writer look. (He writes well but is not, in fact, interested in writing. He likes problem sets. Multi-variable calculus. Statistical analysis. There’s more but I don’t know how to describe it. Literally, I don’t understand it enough to describe it.)

It’s interesting how some people are naturally good at finding gifts that please those who receive them. I say “naturally,” because I do think it’s a trait that one is born with. I remember when Davison was in sixth grade and had to find a Secret-Santa present for girl in his class, but nothing that cost more than ten bucks. I went with him to a local shop, and he picked out a set of dangly earrings on sale for exactly ten dollars. They were cute! I thought he’d nailed this Secret Santa thing; this girl was going to be totally wowed. It didn’t sound like she was, in the end—I don’t know why, I only heard part of the story—but the point is, he showed early promise in the gift-giving department.

( All right, yes, I’m still a bit irked at the girl for not being wild about the earrings, even after all these years. The Secret Santa tradition, it seems to me, promotes more ill will more good will. Parents get drawn into finding a present for a kid who may well not like it; their own child may be just as disappointed; and the whole notion of giving as a gesture of the holiday spirit goes by the wayside. I thought maybe Secret Santa had been junked, but I just came across a posting by someone who goes by Crappy Christmas Letter on Be Like Water Production’s blog, whose daughter just had a bad S.S. experience. Crappy Christmas (interesting name there) wrote about having a fun time picking out a pretty box and necklace and chocolates with her fifth-grade daughter, Elizabeth. Surprise, surprise: The recipient didn’t like her offering and had no trouble telling Elizabeth as much. By the end of the post Crappy Xmas was plotting some kind of public humiliation for the girl.)

Back to Davison. He’s going to be put to the test in the next few months: He’s confronting, in quick succession, his girlfriend Sidney’s birthday, Valentine’s Day and the one-year anniversary of being with Sidney. What a terrible trifecta! I never had to face that kind of pressure. Good thing, because I’m not sure I could’ve handled it. I would’ve ended up buying, I don’t know… what might have I gotten one of those guys I dated in college? I’m straining to think of an idea, but I’m blank; completely blank. Ah, well, that was a long time ago. But Davison’s go this thing in hand, he has assured me. Of course he does. He’s a natural. He’s just going to get better and better at giving presents. I can’t wait to see what he gets me next Christmas.