The Lure of Donna Tartt’s The Goldfinch 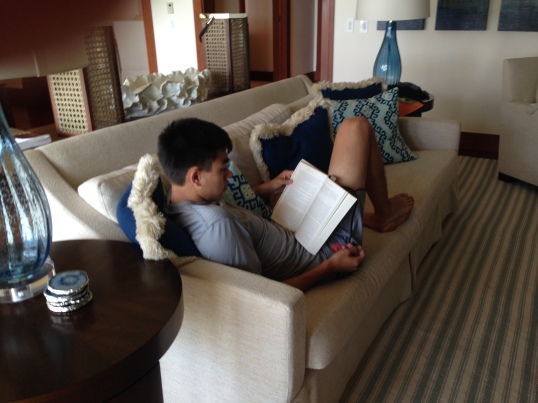 This is my 21-year-old son Davison, reading during spring break from college.

Reading! Proof that college students still read books when they’re not in school. And he happened to be reading a book I gave him, Donna Tartt’s The Goldfinch. I can’t even express how happy this makes me. I gave it to him for Christmas, thinking, He has to read this book—everyone has to read this book, even as I doubted whether he’d get to it anytime soon. It’s 771 pages long, after all, and he was about to embark on another term of challenging classes. But he took it back to school with him, and lo and behold, he was in the thick of it by the time I saw him in March. I asked him what he thought, and he said he wanted to see Theo, Tartt’s protagonist, catch a break, just one. I knew exactly what he meant. Tartt sucks you into a world that is so vividly rendered and so painful for Theo that you feel like you are suffering alongside him, an invisible companion who can’t do anything but watch and worry and hope that happiness is just around the bend. Then Tartt turns around and challenges our assumptions about what constitutes a meaningful life. At the end, Theo tells us, “We can’t choose what we want and don’t want and that’s the hard lonely truth. Sometimes we want what we want even if we know it’s going to kill us. We can’t escape who we are.” It’s not an uplifting book, but it’s an unforgettable one.

I feel lucky that Davison’s formative years came before technology seeped into every crevice of of everyday life. When he was six or eight, computer games were new, and we had maybe one or two. (I remember the Freddy the Fish game—pretty cute, as I recall. Freddy helps you on a deep-sea treasure hunt.) He didn’t have a cell phone until he was thirteen—one of those flip phones. There was no texting or apps. I can’t make any statements of fact here, but I believe that he read more in his free time than he might’ve had he had access to social media, the Internet and the vast array of computer-based games that exist today.

Studies on kids and reading are troubling. Only about half of kids ages six to eight are reading daily; that number falls to a quarter by age fifteen. According to one study, the percentage of seventeen-year-olds who never or hardly ever read has gone from 7% to 27% in the last thirty years. (I’m assuming the study is referring to reading for fun. Schools may have eliminated art, music and physical activity—at least in New York City—but they’ve hung onto the three Rs. For now.) How do we keep reading books a part of the picture? It’s up to parents. We need to read to our kids when they’re young—from the time they are babies for as long as they’ll let us. It’s the only way to instill a love of reading and stories (which I can’t believe aren’t innate in kids). And then we have to encourage them as they learn how to read. We need to help them choose books and bring them books and make reading a family activity.

This is pretty obvious stuff, I know. Also, it doesn’t always work. My sister says her two boys, 10 and 12, are off books. Period. Nothing to be done. If it were me, I’d keep trying. Just like you don’t give up trying to get your kids to eat vegetables, you have to keep trying with books.