The Bullies of the Baltic

Going through my notes, I realized I had no photographic evidence of a vital component of Finnish life: the sauna– sow-na, as the Finns pronounce it. According to our guide,  it’s the only  Finnish word that’s made its way into the English language. (It may be the only word we could pronounce!)  The sauna is “one of life’s necessities, intrinsic to, and invisible from, elemental notions of Finnishness,” writes Michael Booth in his humorous book The Almost Nearly Perfect People: Behind the Myth of the Scandinavian Utopia.  As you might suspect, an American cruise itinerary doesn’t include a trip to the sauna.

Anyway, onward to Stockholm. Sweden, I learned,  Was an aggressor in centuries past, controlling Estonia and Lithuania for for long periods and warring with Denmark every chance it got (and vice versa). 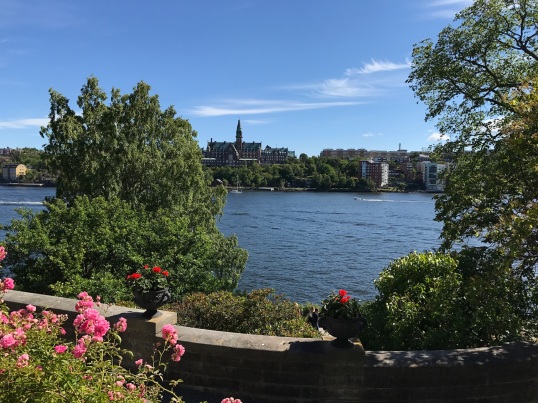 Unexpectedly worthwhile: Waldemarsudde, home and gardens of Prince Eugen (1865-1947). Flowers from the garden in every room, as if he were still living there. Portrait above of his mother, Queen Sofia; the prince designed the vases. Fun fact: the Swedes ran out of suitable rulers and brought in a Frenchman to be king in 1818.  His descendant, Carl XVI Gustaf, is the king today. 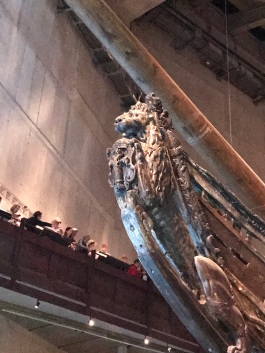 I know absolutely nothing about boats or maritime history and was baffled to hear we we’d be spending precious hours in Stockholm at a museum dedicated to some warship. Well, it was a pretty fascinating story, And the ship itself an extraordinary 400-year-old artifact, not to mention a symbol of royal hubris run amok. The Vasa, built in 1628 to show off the might of King Gustavus Adolphus, sank on its maiden voyage without  even leaving the harbor. The fatal flaw: the ship was top heavy. The king had insisted on a third gun deck, over the objections of the ship’s builders. What the king wanted, the king got. Fifty people died in the sinking–a third of the number on board. The bronze cannons were salvaged by divers later in the 1600s–that in itself an extraordinary feat. The ship itself–largely intact–was recovered in 1961.

I think one can ascend the tower of the Stockholm City Hall for an outstanding view, but we went to gaze at the vast rooms where the Nobel Prize winners are fêted. To the left, the hall where the Nobel banquet is held, serving something like 1,000 people (the Swedes watch it on TV,  like a kind of Oscars night).  The Nobel ball (who knew there was dancing involved?) is held in a room covered in gold mosaic (right)  dating from 1921-23.

The City Hall gift shop has a number of bizarre offering. I was tempted to buy the Nobel cookbook as a novelty (the food couldn’t be any good, could it?) but settled for a birch-wood butter knife (it may be a long wait before anyone asks where I got that oh-so-attractive butter knife).